Select a box and SCROLL DOWN

Getting Assistance While Voting 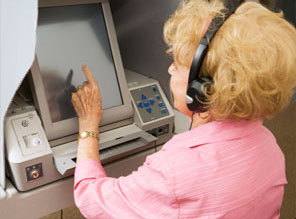 Voters who have a disability or physical limitations may ask for assistance at the polling place. Voters can contact your local County Election Official before Election Day if special arrangements are needed. Federal law requires all polling places to be accessible. If you feel your polling place is inaccessible, please contact your County Auditor.

The Help America Vote Act (HAVA) requires that each polling place for any Federal election provide a voting device equipped to allow voters with disabilities the means to vote independently and privately. South Dakota has chosen the ExpressVote by Election Systems and Software.

The ExpressVote warns of undervotes and will not allow overvotes. The voter may make changes before the ballot is marked. The voter is provided a summary of selections. When the voter selects “Mark Ballot,” the voters’ selections are printed and the ballot activator card is ejected. The ExpressVote keeps no record of votes. It is a paper-based, electronic ballot marking device.

The voter takes the marked ballot card to the precinct ballot box for casting. All ballots-whether voted by pen or ExpressVote go into the same ballot box. A ballot privacy sleeve is provided to all voters.

The ExpressVote can serve every eligible voter, including those with special needs. As a fully compliant ADA voting solution, the ExpressVote allows both standing and seated voters to mark and cast their ballot activator cards independently. An accessible keypad equipped with braille and the ability to use rocker panel and Sip-and-Puff devices make ExpressVotes key in South Dakota elections.

If you feel you cannot vote on the day of the election, please fill out an absentee ballot application and mail it to your County Election Official by 5:00 pm the day before the election to receive an absentee ballot. Absentee voting begins 46 days prior to the primary and general elections.

If you are seeking further assistance, please contact the following groups: